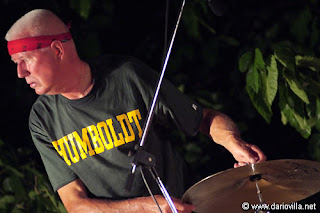 Legendary Dutch drummer Han Bennink turns 70 today, and there's a storm of celebration on the airwaves and in the jazz blogosphere:
Patrick Jarenwattananon marked the occasion over at NPR's A Blog Supreme;

Columbia University's WKCR kicked off a five-day marathon of Bennink's music (you can stream the station online), which culminates with a Sunday evening concert by Bennink, joined by Richard Teitelbaum, Ray Anderson, Uri Caine, Mark Dresser, Mary Oliver, Thomas Heberer, and Humboldt County's own Michael Moore, a longtime collaborator.  (Bennink and Moore will also reunite with accordionist Will Holshouser for a separate trio concert Wednesday night on New York's Lower East Side, to mark the release of new album, Live in NYC, on Moore's "Ramboy" label.)
The Mad Scientist of the Skins has twice been a guest of the RJA, once during our inaugural 2006-07 season, with the ICP Orchestra, and again in 2009, with Holshouser & Moore.  As far as we can tell, he's showing no signs of slowing down, and we hope to see him back this way again.

Many happy returns of the day, Han!
Posted by humred at 7:44 PM