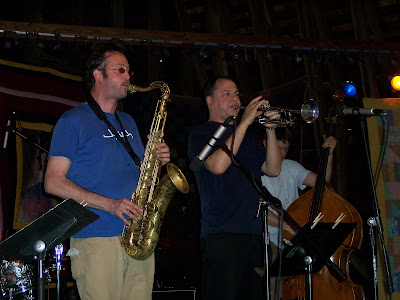 Michael Blake, Ron Horton and Ben Allison. This is taken at the Penofin Festival, the day after they played at Humboldt with the RJA. Ben Allison's compositions are extremely wel put together. I can't think of another writer who has so much fun with the "post bebop" tradition. It gets him into funny conversations with and about Wynton Marsalis, but that's to be expected. He is listening to the world we live in, and having great big fun with it. I think he's unique.

And I can't begin to express my appreciation for Ron Horton's trumpet playing. It's lyrical, fast, as witty as Ben's material invites him to make it. His tone is pure and sweet like Armstrong, but without the hard vibrato of course. This band is rough on trumpeters, he told me: he's featured in the melody a lot of the time, and a lot of it is high and sustained note playing.

All around great stuff. A show to remember.