Greetings from your friends at the Redwood Jazz Alliance. We've got one more concert this season and it's going to be a good one. Ben Allison and his quintet Man Size Safe will be at Fulkerson Recital Hall on the HSU campus on Thursday, May 15 at 8 pm.

Ben Allison is one of the top young bassists in jazz today. He's won the Downbeat Magazine Critic's Poll "Rising Star Bassist" category the last three years and is equally praised as a composer and bandleader. Allison was the subject of a major profile in the April issue of Downbeat and the article proclaimed that his new CD with Man Size Safe, "Little Things Run The World" "promises to stand tall at the end of the year among the best CDs of 2008…Conceived with careful architectural attention and infused with myriad styles, including rock, pop, African, Americana and Latin, Allison’s cliché-free music has all the earmarks of jazz in motion to a higher evolutionary plateau." The article also raved that Allison is “leading a movement to create generationally relevant jazz.” He "stands at the forefront of a generation of young musicians who, steeped in the tradition, forge ahead with new modes of expression…[a place] where original music melds with social significance, where community identity trumps egocentricity and self-indulgence, where fresh standards resonate with the same emotional depth of the classic songbook."

Man Size Safe (the name was inspired by Allison reading in the Washington Post that Dick Cheney's office contains such an item) consists of Michael Blake on saxes, Ron Horton on trumpet, Steve Cardenas on guitar, Allison on bass and Michael Sarin on drums. The band mixes joyous exuberance and good-humored irreverence with textured grooves and an occasional political jab. “I’ve started to dabble in advocacy," Allison admits, "especially along the lines of alternative energy and renewable resources.” And yet, he cautions, "I don't want to use my music mainly as a platform. My main inspiration is to show by example what it means to cooperate, to celebrate this international art form that's about collaboration, peaceful interplay, and creative expression. That ties right into the biggest worldwide issues we face."

You can read more about Ben Allison, hear his music and check out some terrific multi-media content (including a podcast review of "Little Things Run The World" by New York Times critic Ben Ratliff and an "All Things Considered" feature on Allison) at our website:

Tickets are $15 general admission and $10 for students and seniors and are on sale now online at http://www.redwoodjazzalliance.org/tickets.htm and at Peoples Records, the Works in Arcata and Eureka and the Metro. (Please note the Metro charges a $1 handling fee on every ticket sold there.)

As with all artists that the Redwood Jazz Alliance brings to town, Ben Allison will also present a FREE public workshop. His is entitled "Composition and Improvisation: Two Sides of the Same Coin" and happens Friday, May 16th at 11:00 a.m. in the Studio Theater (Theatre Arts Room
115) on the HSU campus.

We'll see you at the show! 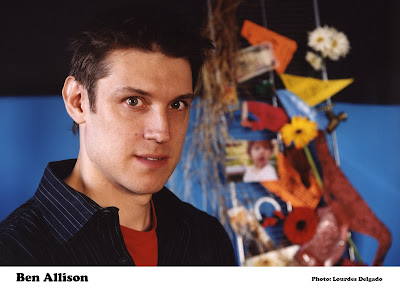