Steve Lehman at All About Jazz 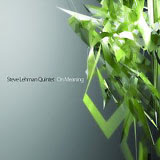 Just in time, because I'm sure it's gonna be good. I haven't heard it yet but I will soon, on Christmas Day to be exact, because that's when my "40 downloads a month" turn over again at Emusic. (You do know about Emusic, don't you?)

I have listened to Steve's earlier CDs at Pandora (which you do know about, right?). I especially like the "outside sax solo" Pandora's committee of real musicians identifies as one of Steve's primary descriptive traits.

Here's a comment I appended to Phil DePietro's review at Allaboutjazz:

This CD is waiting on my "For Later" list at Emusic--till my month turns over on Christmas day.

I saw Steven Lehman at last year's Guelph Jazz Festival and Colloquium. He was there for the colloquium part. He read a really great paper on his mentored relationship with Jackie McLean, who had recently passed. It was smart and intelligent and moving--what more academic papers should be like.

Steve Lehman is for the watching.... 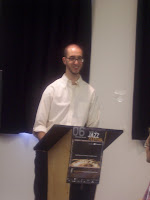