This is Not Jazz! 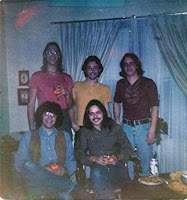 This is not about Jazz music, but it's still interesting, I hope. It's an email received from Bill Baillargeon, one of my oldest pals. Indeed, we go all the way back, and what with that Quebecois family name, "we" probably go back even further than just Bill and me. (My family name was Tessier before Anglicization.)

And that's the theme here. Bill describes perfectly the dawning of his and my and dare I say a goodly portion of an entire generation's serious interest in real good music. That's why I want this posting here. It sums up what it was like to come into awareness of popular music in the late 1960s and early 1970s. We are now the fifty-somethings. We are a major segment of the baby boomer generation (we were thirty something at exactly the same time [in the 1980s] as that insufferable TV show).

So really it is about jazz, as a follow up email from another of our pals will show. The pic is from Christmas night, 1975. The writer, Bill, is seated on the right. That's me with the long hair.

I recently pulled out my turntable after many, many years in the closet. And I still have - I'm pretty sure - just about every LP I ever bought. I couldn't guess the number, 300 at least, probably closer to 400 or 500. I still have what I remember as the first "serious" record I ever bought. It was the Delaney and Bonnie "On Tour" album. I was boasting to Zoe - my 15 year old - that I could still list the personnel on that album.

I did, too, but then I had to pull out the album and prove it. That got me determined to fire up the turntable - remembering some of the treasures buried in that pile of LPs. Pulled it out -tried it - belt disintegrated - the climate here is not kind to rubber and such things. But, a new drive belt later - and while I was it a new cartridge and stylus, as well - I got it running (my kids cracked up seeing the turntable. Zoe was telling friends at school about her ol' man pulling out the antique).

First thing I put on was the Delaney and Bonnie - Zoe wasn't impressed. What got me to that point in the first place was that I was trying to explain to Zoe why I really like Pandora - thanks Bob for turning us on to that. I like it because resembles the way we learned about new music - we listened to the radio, caught stuff we liked, bought the album, read the liner notes, learned the personnel and used that information to pursue new music. Kids now don't much listen to radio that I can see, probably because it mostly sucks - and iTunes doesn't encourage that kind of exploration because the liner notes and personnel listings aren't readily accessible. I mean that D & B album that I bought when I was 14 years old - and which still plays almost completely without flaw - because of the personnel I learned about on that album, influenced the music I listen to even today.

Aside from D & B - I may be the only person on the planet who has all of their albums - that album has Leon Russell which led to to Cocker through the Mad Dogs and Englishmen album, Dave Mason which led to Traffic and to Winwood which led backwards to the Spencer Davis Group, Clapton who led everywhere. You get the idea. That's another reason iTunes and the like suck, they promote buying songs, not albums. For us, we heard a song on the radio, but we had to get the album to hear any more. I think we regarded the album as a body of work to be regarded as a whole. Thats not the case anymore, and thats sad, especially for the artist.

I was reminded, too, that we've bought a pig in a poke. We've bought into a steady decline in fidelity. The first decline in quality was from analog to digital (lp to cd), which takes something continuous and makes it discrete. That, by itself, makes the playback a little flatter - less contoured in my kind of spatial way of visualizing things. Now we've accepted a further decline with the compression of digital (mp3, aac, and other formats). When I put on that Delaney and Bonnie lp after all these years and cranked it up, it was a revelation. It was so much more alive, felt and sounded fuller, more complex. Even my 50+, abused ears can still tell the difference. Which makes my first impulse all the harder to take - I'm going, geez, I wish I could digitize this stuff. I guess it makes sense - easier to access, more convenient - just fake it a bit with some signal processing. I never replaced most of the stuff I bought on lp, so most of it I haven't heard in years.

And here is a follow up posting by John Beck, another of the oldest of old buds. He's not in the picture--away at MSU at the time, I think.

Thanks Bill for the memory rant. Ah Yes, music. Music framed so much of our young lives. I remember sitting in the corner of the cafeteria with some of you and hearing Cocker’s “Cry Me a River” coming over the radio/PA in the room: Bill, JD, and Bob singing “Suite Judy Blue Eyes” at Art Train; O’s band playing James Gangs’s “Walk Away” in the Teamsters basement; hearing “Change Partners” off of Stills 2 at Bill’s house for the first time, and breaking the cellophane on “Aqualung” at my house and laying with my head between the speakers on the old console Magnavox for “Locomotive Breath.”

I was lucky to have all of you for musical life, as well as T. G. (a year ahead of me) and Billy S. T introduced me to a whole new world of music when I met him around freshmen year (Tull, Ten Years After, Pink Floyd, Monk, John Mayall, Johnnie Winter, Muddy Waters and all sorts of other really good stuff). Unfortunately, I get rid of most of my albums long ago. I kept a few that I could not part with (The Band, Blood on the Tracks, Old Weather Report, Joni Mitchell, Bonnie Raitt, etc.). A. A. never lost his love of vinyl and probably owns ten thousand records now (he does estate sale and thrift store buying and e-bay selling as a hobby). When A. and I went to Elnora Vader’s funeral, we hit every thrift store and use d book shop from Escanaba all the way back to .

I am listening right now to my music of choice, South African Jazz (Sipho Gumede’s “New Era”), where you can track some great artists from the liner notes still.

Email ThisBlogThis!Share to TwitterShare to FacebookShare to Pinterest
Labels: Getting to Jazz; 50-something; baby boomers