On the Horizon, Incoming, for the Watching.... 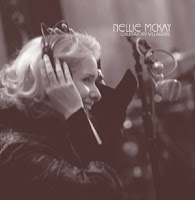 Nellie McKay. Pronounced "Mick I," as I found out yesterday in the car listening to Terry Gross's year-end round up of "Fresh Air."

First featured were a duo of comedian singers from New Zealand who apparently have a great TV show. Alas I've never seen the show and so my radar wasn't on, and I didn't catch their names. The songs they sang were unbelievably hilarious send-ups of 70s era "message tunes." They were extremely pomo, very adept at pastiche and inter-musical parody. Pretty cruel when I think about some of that kind of music I remember actually liking, way back when (e.g. Marvin Gaye: "What's Going On," which they specifically mentioned as a target). But I'm not whining or being smart about it: they were fantastically funny, and I'll be Googling around to find out who they are.

And also about Nellie McKay, who is on my radar. She sang a couple of gorgeous songs, accompanying herself on ukelele, I think it was, and I was impressed. I'm not very smart about singers but (watch for it....) I know what I like. She did a message tune off her new CD and then a torch song that really had spark to it.

Obligatory Villagers is not exactly a title for the ages, but it's available at Emusic, and it does show up on several Top Ten Or Eleven or Twelves lists for last year.

Last year. 07. Good Riddance. Now I just have to wait for November.

I didn't hear the show, but...Flight of the Conchords, is my guess. We need to get you on the HBO, Ambassador.

Yup. The song appears to be "What is Wrong with the World Today," and it looks like it's featured on Episode 3. You get to see a bit of it on a teaser, here: http://www.hbo.com/conchords/video/index.html